Last Ramadan I was binging on Middle Eastern recipes, but this year I stumbled upon this YouTube channel called Get Curried and was intrigued by their selection of Indian recipes.  At first I wanted to try their butter chicken, but it’s the weekend and I should do something fancier and Mom also suggested I try making briyani.

This isn’t like the briyani I’m used to here in Malaysia.  The video says this is a style specific to the Karnataka state of India, and even then looking at the comments there are a bunch of Karnatakans claiming that theirs is more authentic than the rest, so I can’t comment on that.  Nonetheless the mixture of flavors from the yoghurt, cilantro and mint, and the heat from the cili padi was really interesting and yummy, and I loved how the rice turned out nicely moist without being mushy.

I found the planning stage most exciting when making this.  I started off by mixing the saffron milk, then prepped the ingredients for the green paste.  After marinating the chicken I set a small pot of water on the stove, and prepped the rest of the ingredients while the potatoes were boiling.  I soaked the rice, then put the pot of water for the rice on the stove, and started on the gravy while waiting for the water come to a boil, which would take about as much time as required for soaking the rice.  By the time it was time to add the chicken to the pot, the chicken has been marinating for an hour as planned.  So all the tasks were timed quite nicely and the dish was ready 10 minutes before it was time to break fast.  It was a lot of fun for me.

Do try this out, whenever you’re feeling like a different style of briyani. 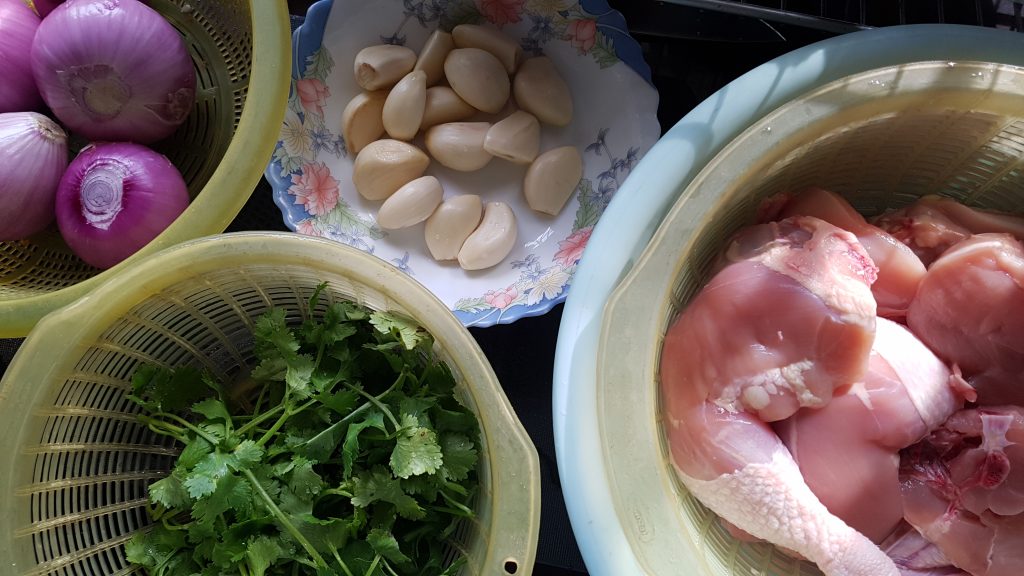 In a small bowl, soak the saffron threads in the warm milk.  Set aside. 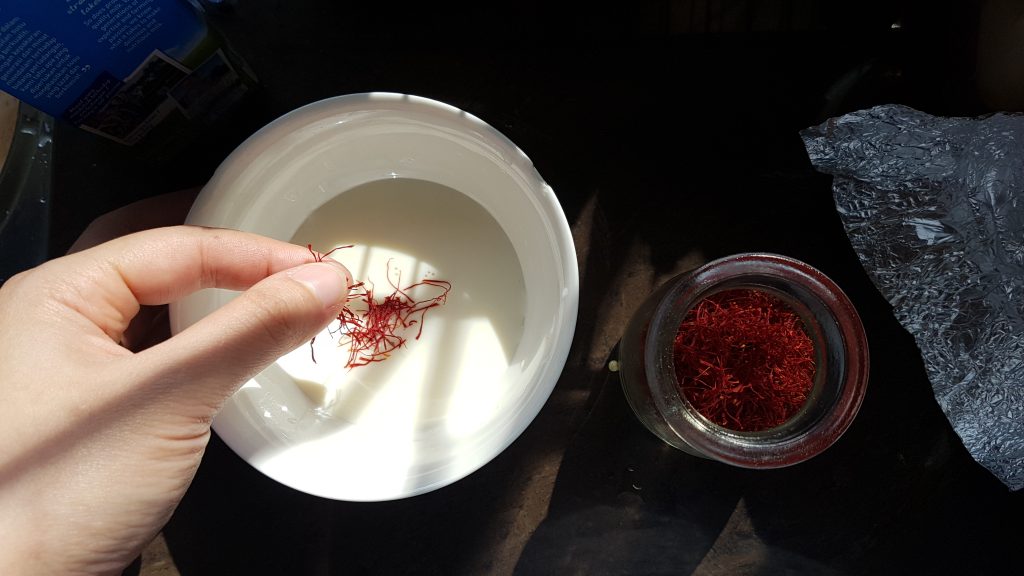 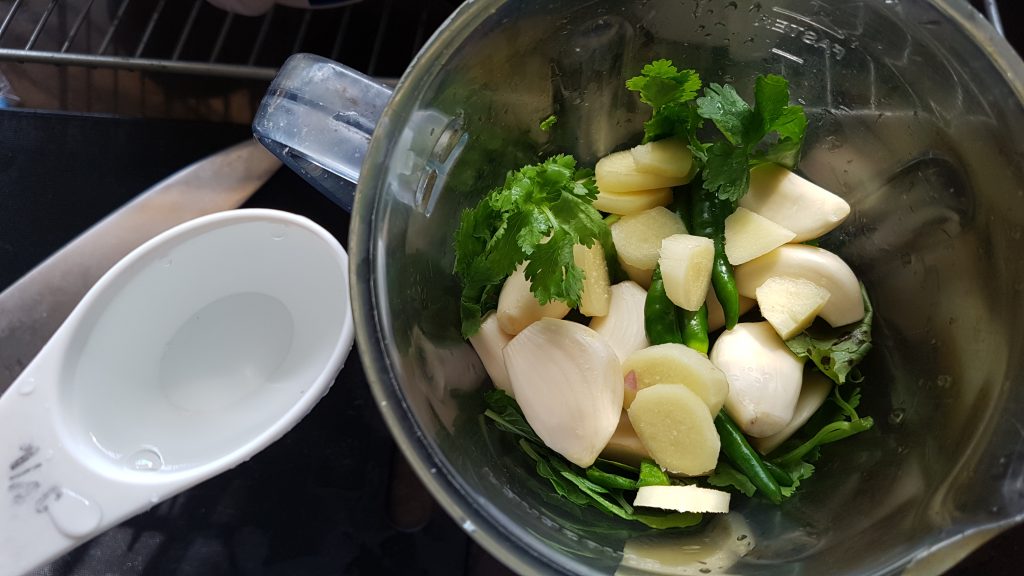 Blitz the ingredients into a fine paste. 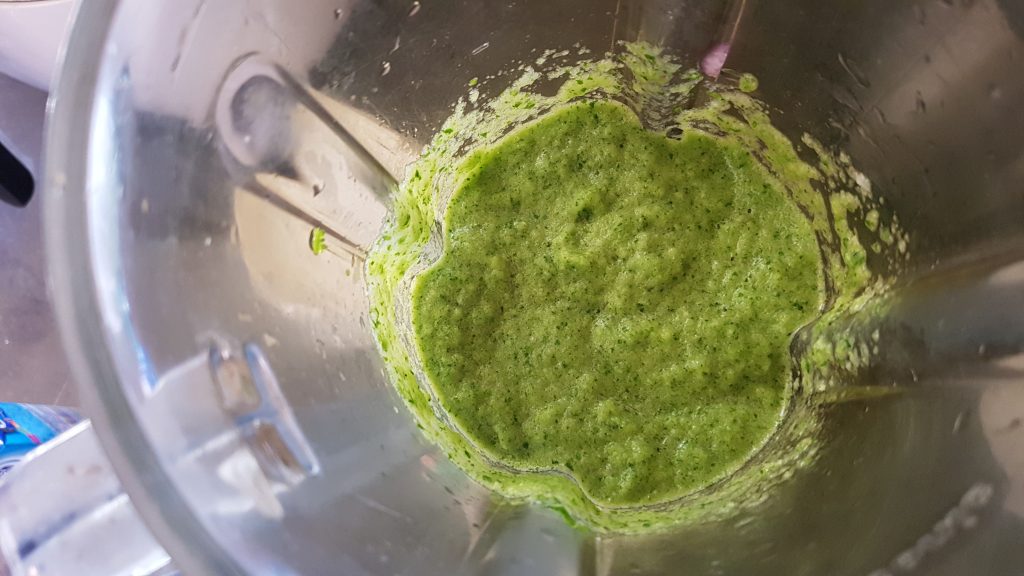 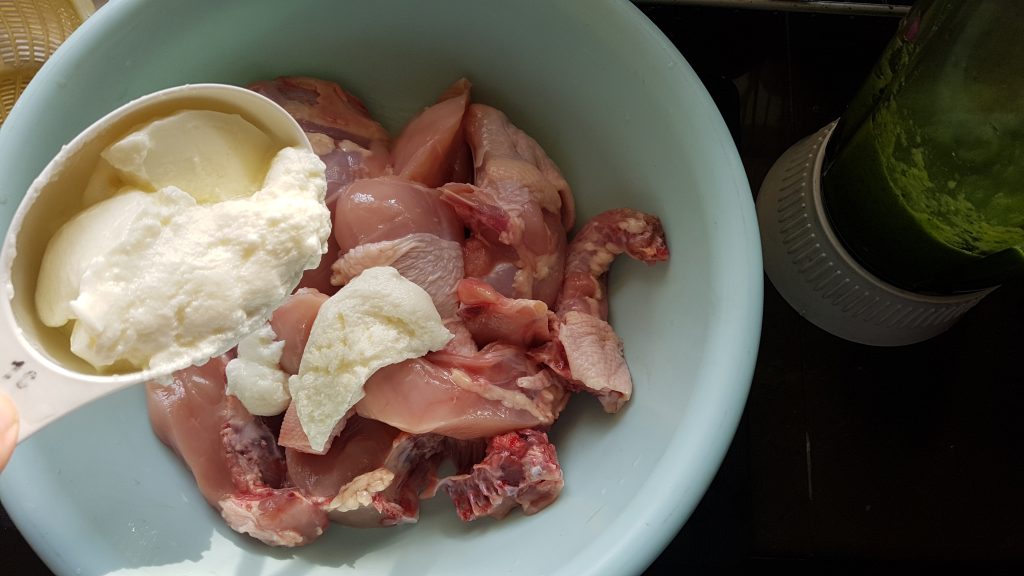 Add the turmeric and 1 teaspoon salt. 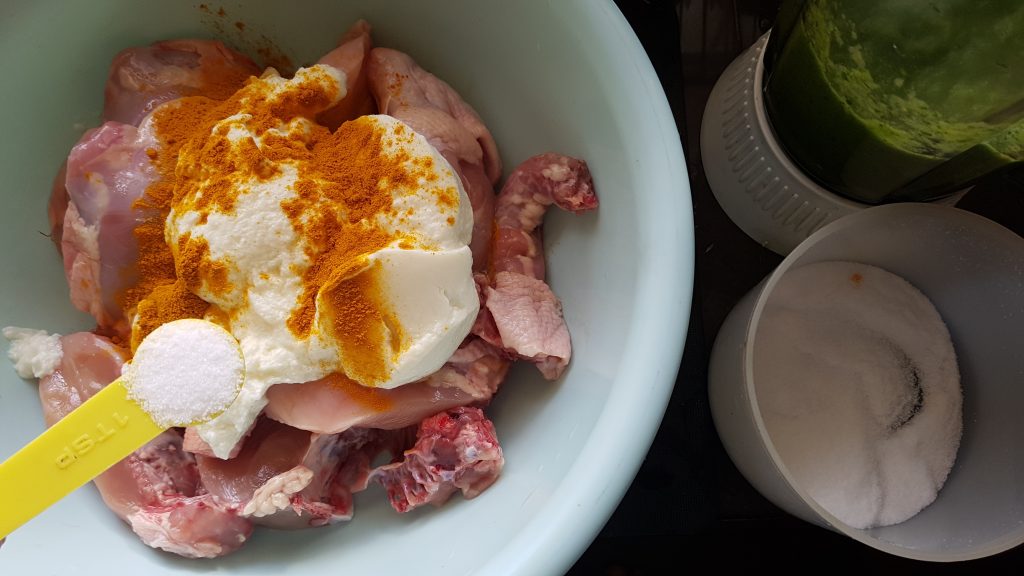 Add half of the green paste. 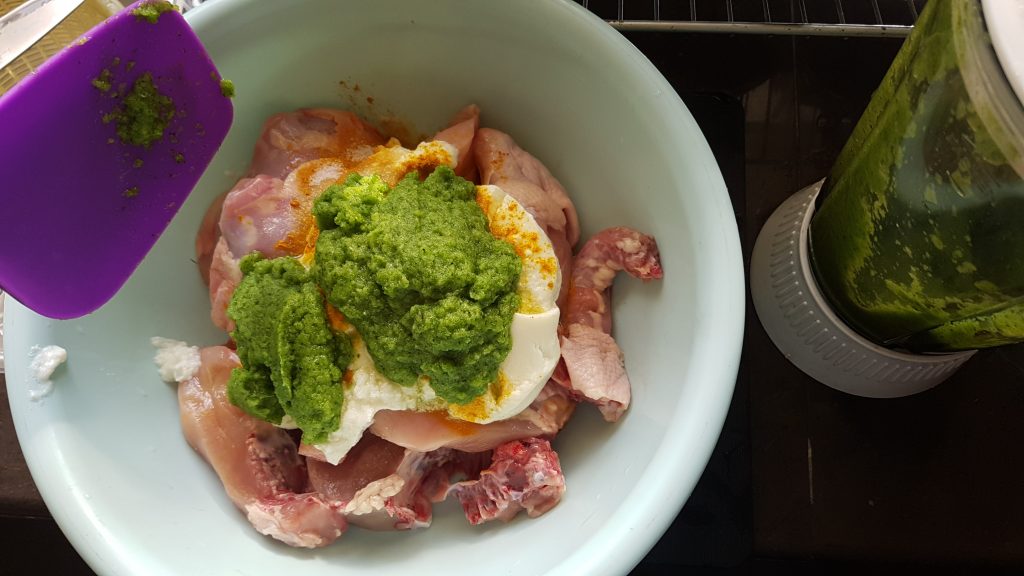 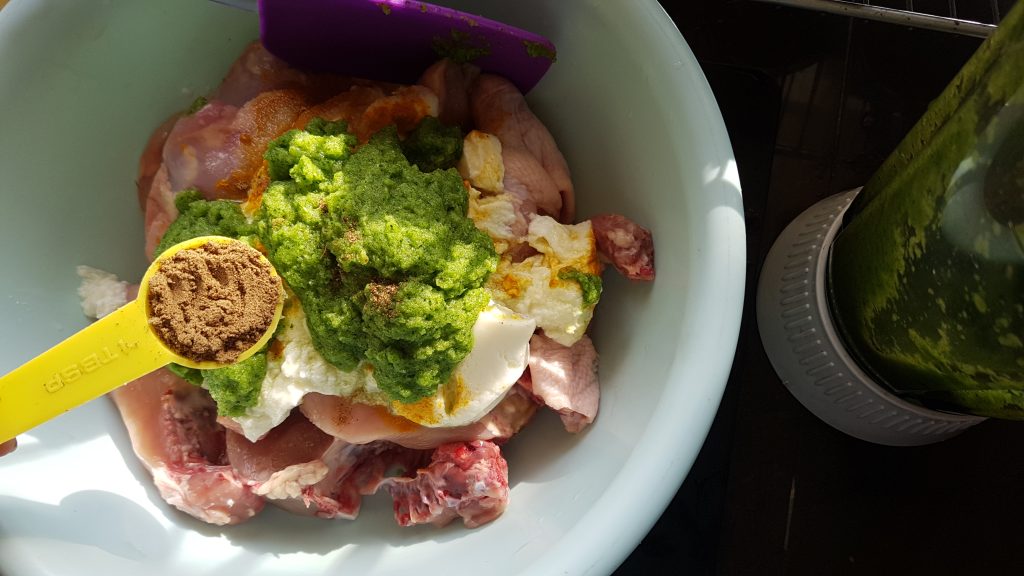 Mix the ingredients and marinade the chicken evenly, using your hands.  I recommend gloves for hygiene purposes, and also because the heat from the cili padi might sting your hands.  Set aside, in the refrigerator if you like, about 1 hour. 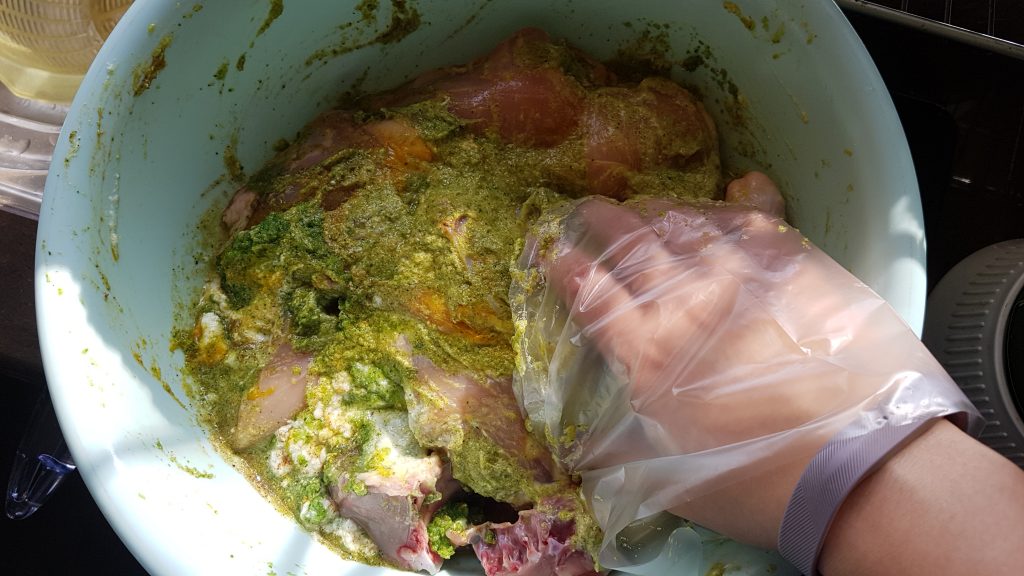 While marinading the chicken, make the gravy.  In a large skillet over medium heat, melt 1/4 cup of the ghee. 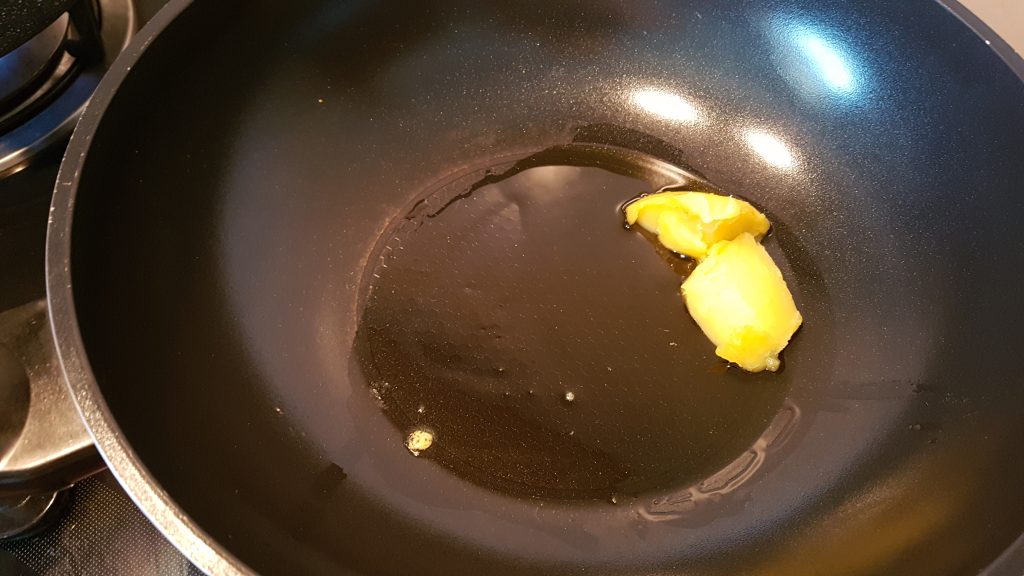 After the ghee is completely melted, add the remaining 4 sliced onions. 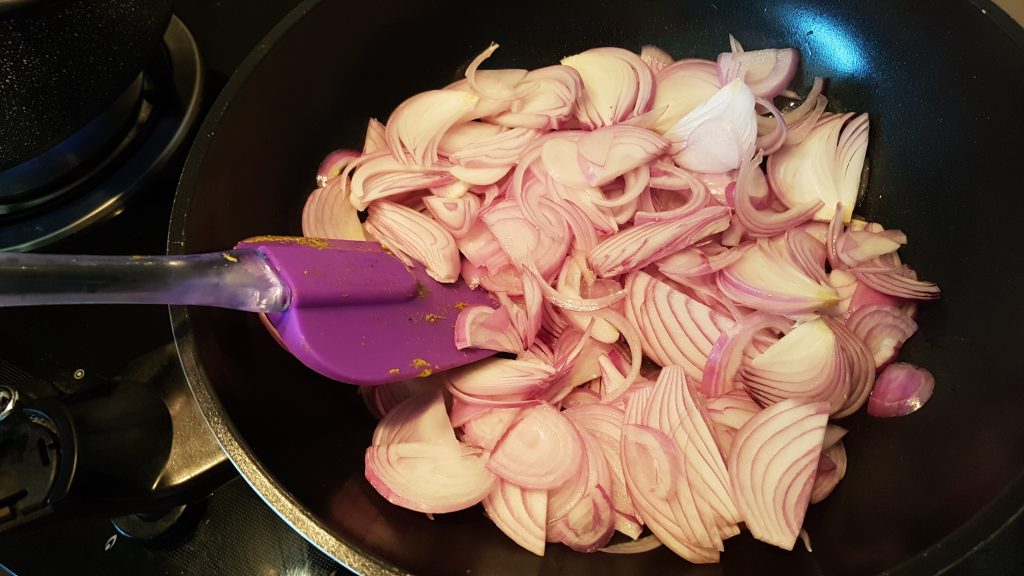 Sprinkle 1 teaspoon of salt to speed up the browning process. Cook, stirring, until onions are soft and golden brown, about 8 minutes. 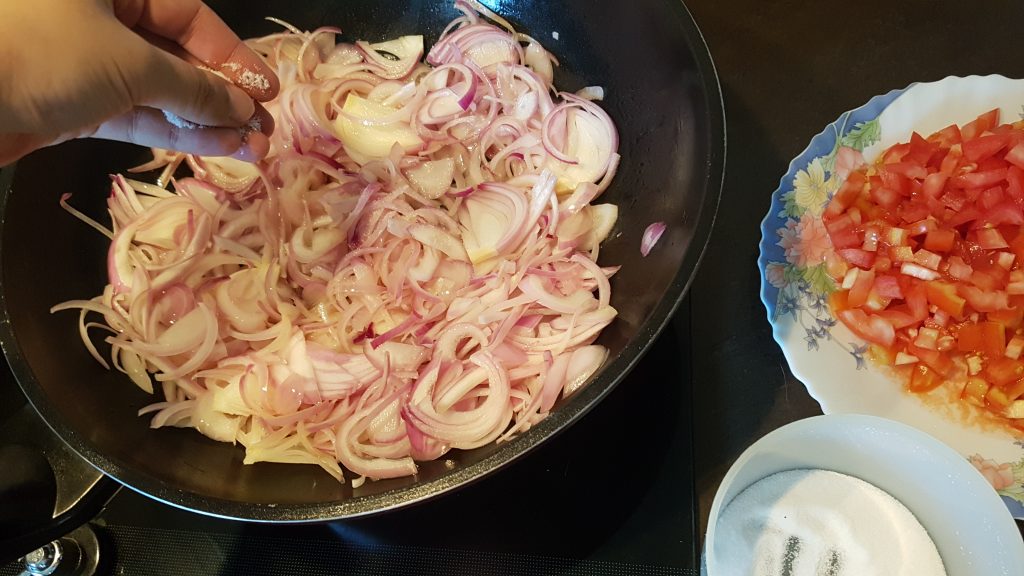 While browning the onions, make the rice.  In a large pot over high heat, bring 3.5 litres of water to a rolling boil.  Add 2 1/2 tablespoons salt.

Carefully add the soaked rice to the pot and cook, until almost done, 10 minutes. 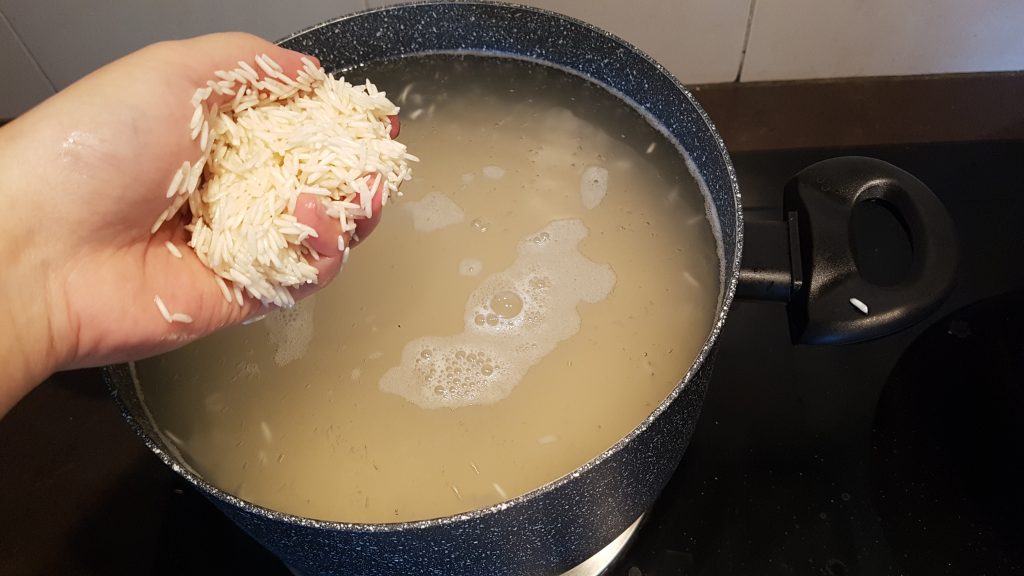 While the rice is boiling, add the remaining green paste to the onion mixture and cook, stirring, until the ‘raw’ leafy smell disappears, about 2 minutes.

Add the chili powder and stir to combine. 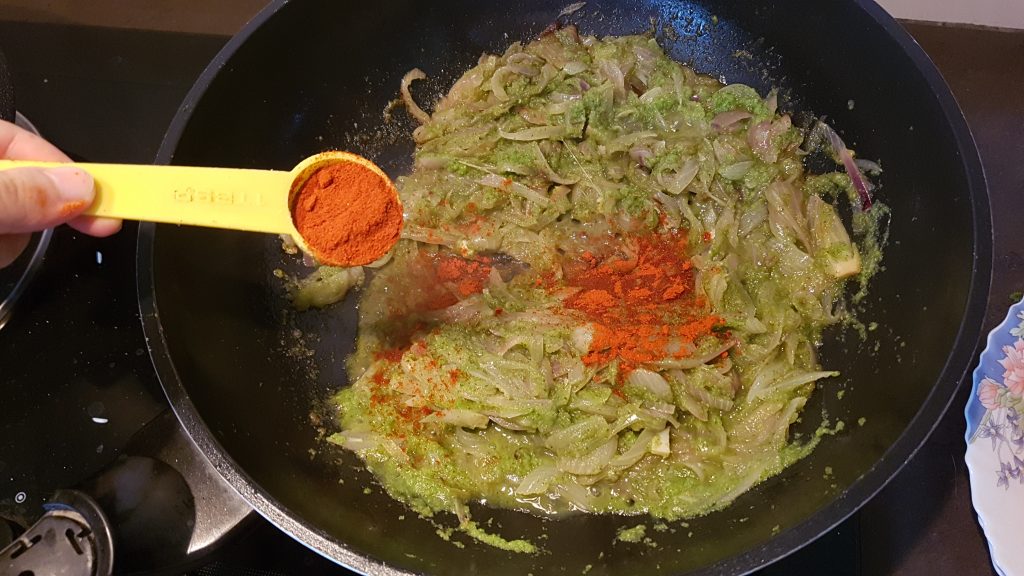 Add the chopped tomatoes and cook, stirring, until very soft and mushy, about 5 minutes.

The rice should be done at this point.  Remove from heat and drain the rice in a colander. 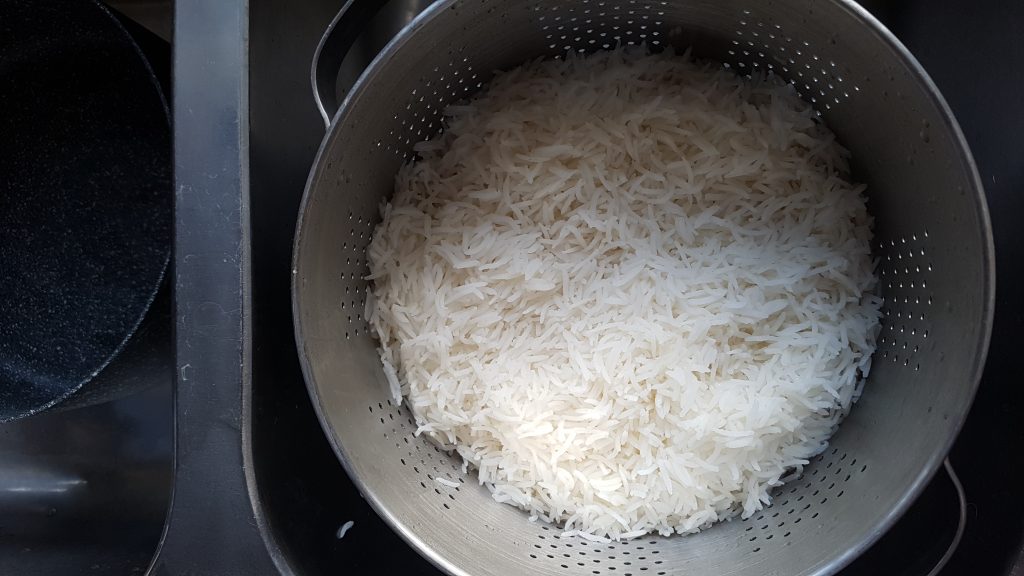 When the tomatoes are ready, add the chicken and marinade, and stir to combine. 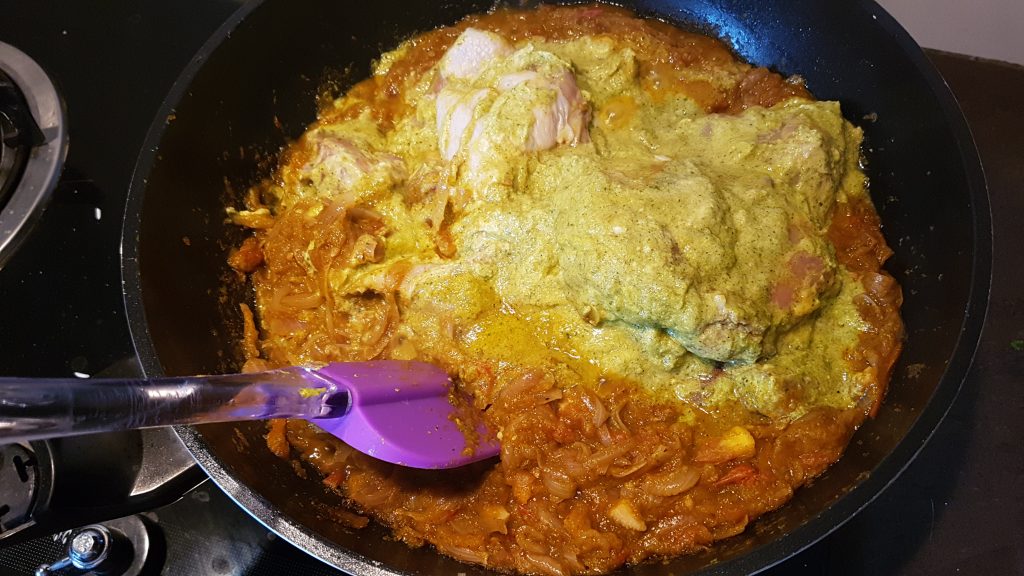 Add 1 cup of water and stir to combine.  Adjust salt to taste. 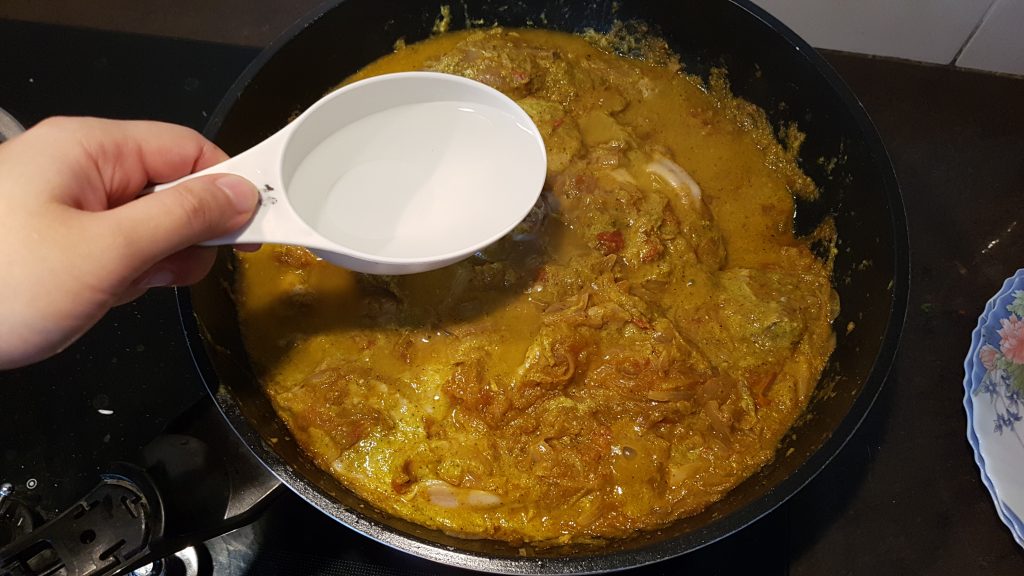 Cover and cook undisturbed, until chicken is almost done, 20 minutes. 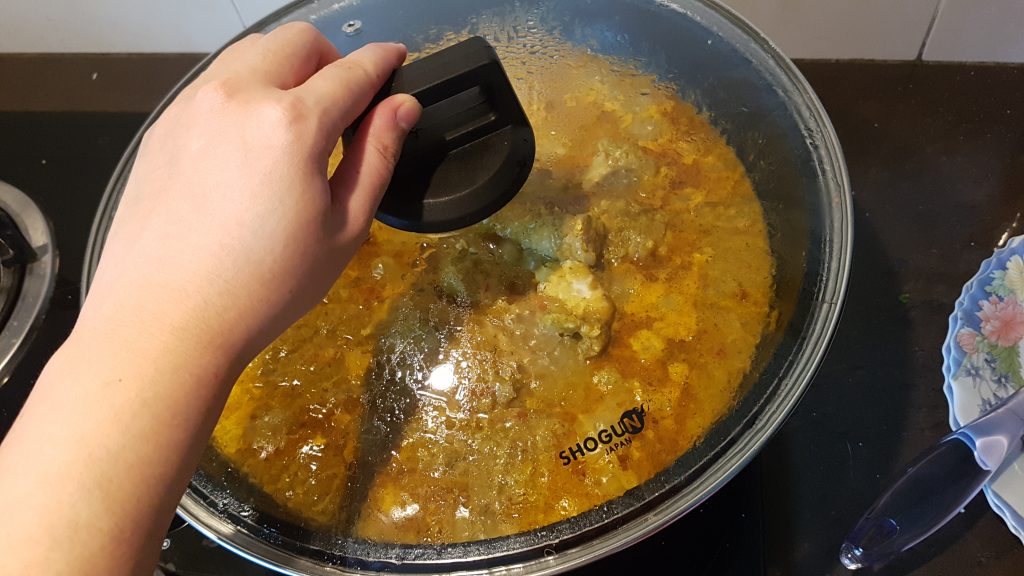 Add the boiled potatoes and cook, stirring to combine, 1 minute.  Remove from heat. 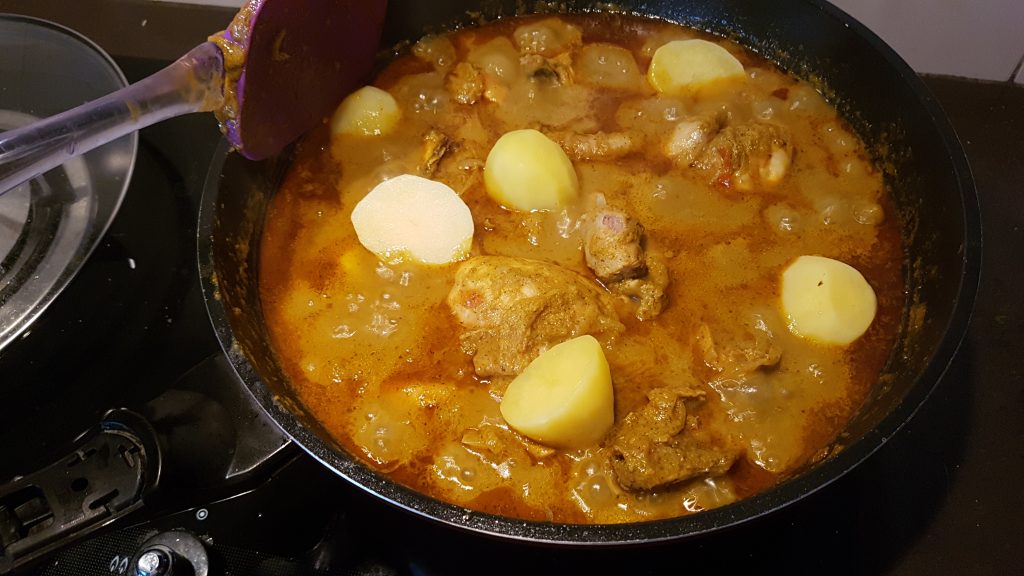 Transfer the chicken mixture into a large pot.  Spread evenly at the bottom of the pot. 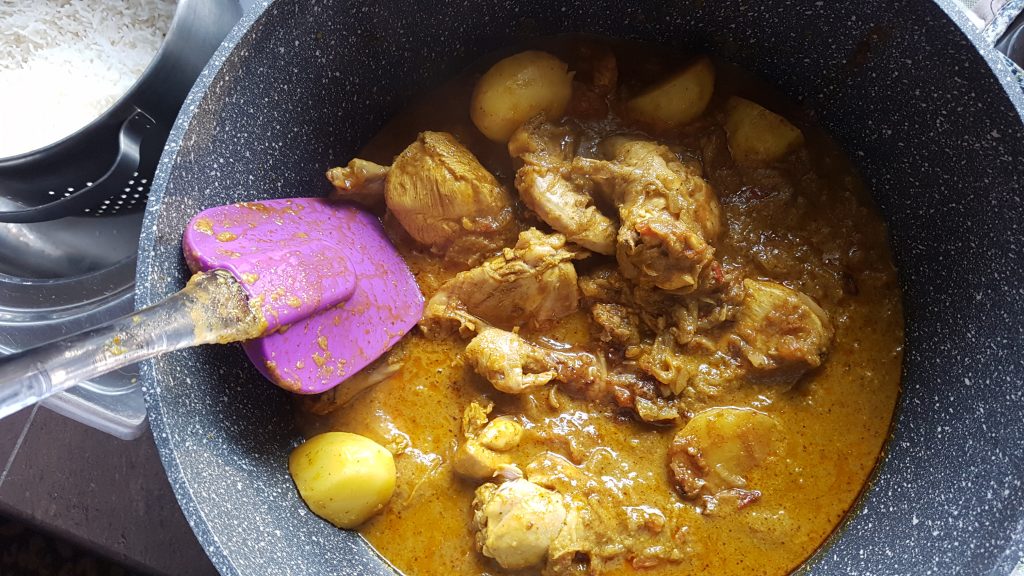 Add the rice to the pot.  Gently spread the rice around to completely cover the chicken and gravy in an even layer, taking care not to press the rice down. 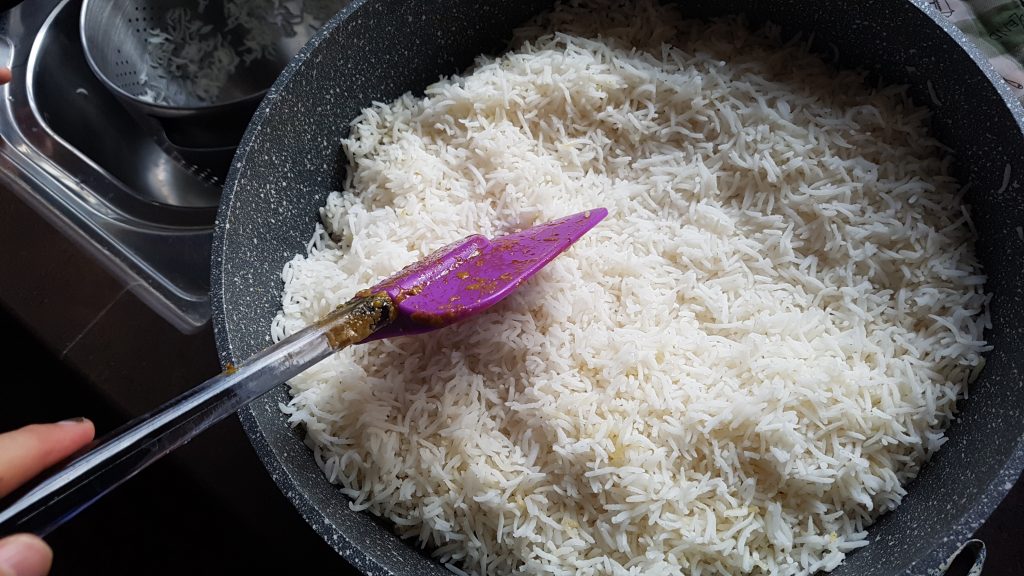 Drizzle the saffron milk mixture over the rice. 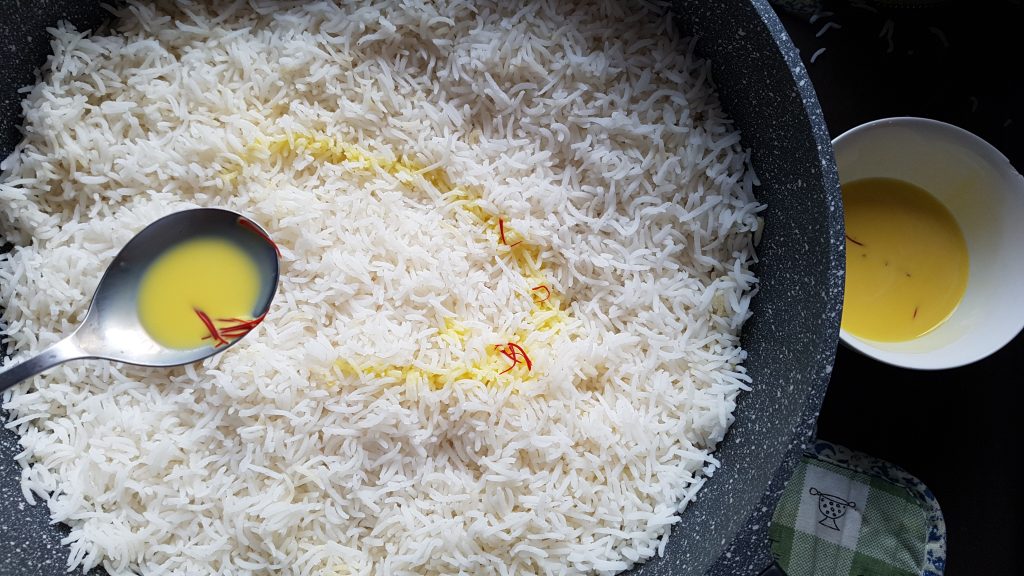 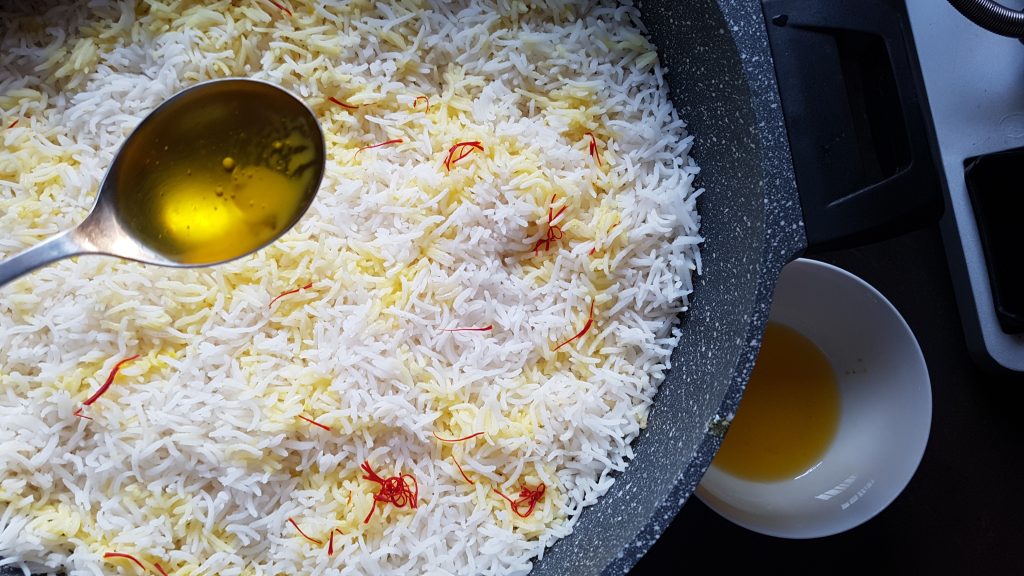 Sprinkle with chopped cilantro and fried onions, reserving some for the final touches. 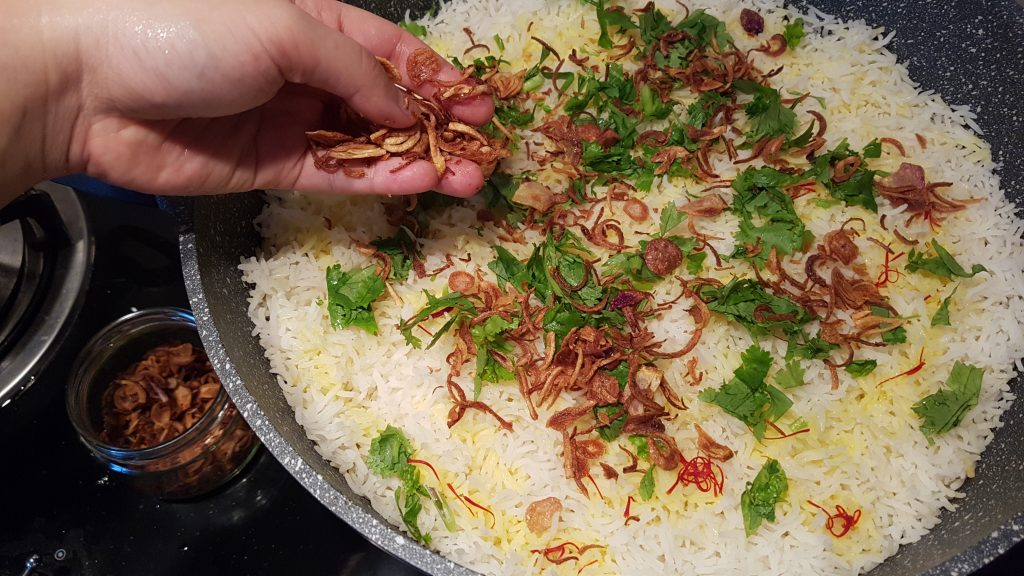 Cover and set the pot over low heat and cook, undisturbed, 15 minutes. 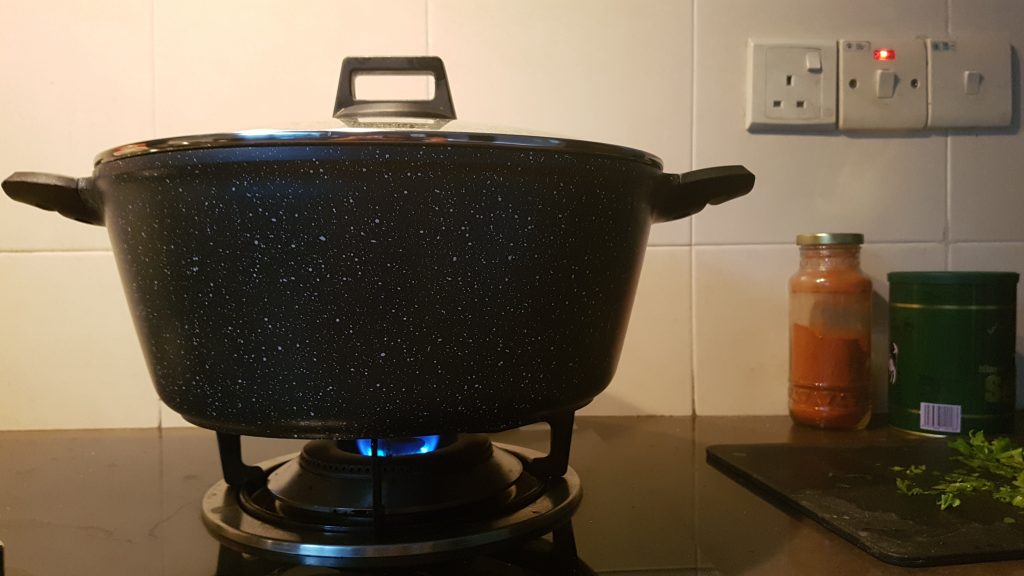 Remove from heat and gently stir to combine.  Garnish with the remaining cilantro and fried onions, and serve. 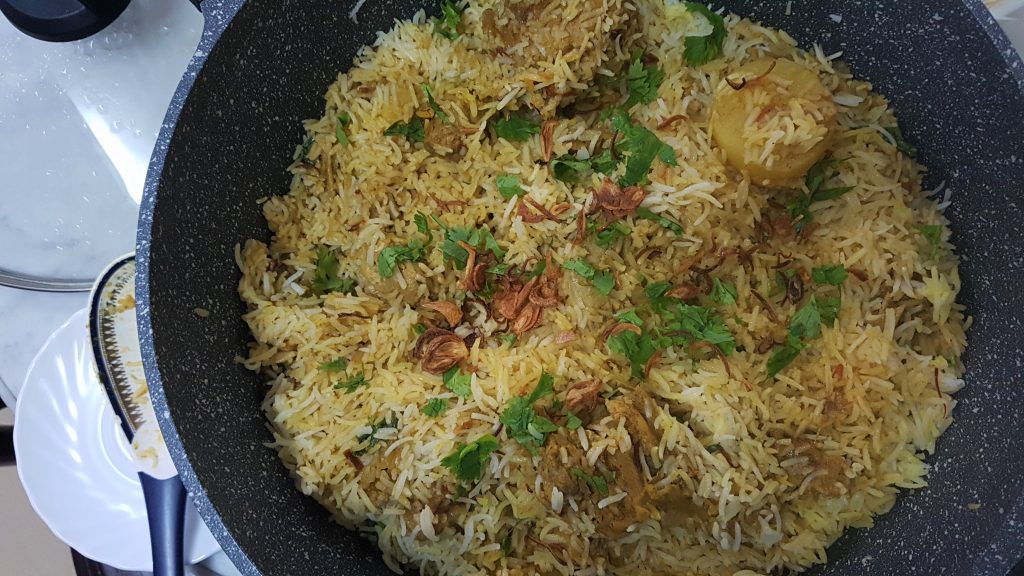