I bought a bunch of pisang mas last weekend, and they were quite green then so I thought they would last a while.  By mid week they’ve started to become overripe, so Kak’mbang asked me to try out this recipe by Chef Kamarul from his book, Resepi 30 Minit Chef Kamarul.  Overall recipes from his book look super simple yet promising in terms of yumminess, and I really do need to use up those bananas, so I gave this a go, with a few small changes.

Mummy doesn’t really like deep fried foods, so I made mine using an air fryer.  I used red sugar instead of brown because it gives a richer flavor, although it does melt really fast and makes the bananas quite wet.  Here’s a tip – be sure to separate out the spring roll sheets upfront, so that you can quickly assemble the spring rolls and chuck ’em in the air fryer.  I made the mistake of (sloooowly) peeling the sheets as I went along, and because my banana mixture was wet, the first few that I assembled became rather soggy and burst during the cooking process.  I also saved some time by using simple Nutella instead of making my chocolate sauce from scratch.

The results were lovely.  The spring roll skin crisped very nicely in the air fryer, and the sweetness of the filling was just nice, letting the natural flavor of the bananas do most of the talking.  A good snack ready to eat within 30 minutes!

Peel the bananas and place in a large mixing bowl.  Using a knife, cut a few slits on the bananas. 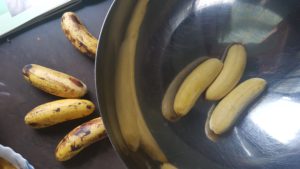 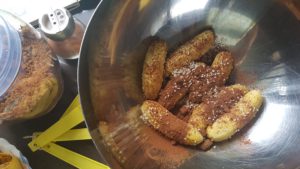 Using a spatula or wooden spoon, toss to evenly coat. 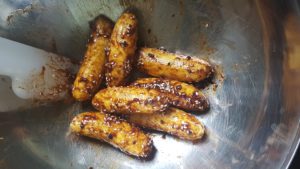 Working as quickly as possible, one banana at a time, place a banana on a spring roll sheet, then fold and roll tightly. 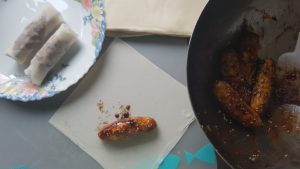 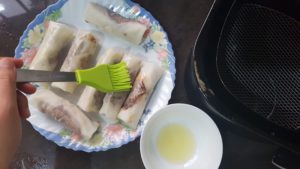 Arrange neatly in the air fryer basket, leaving some space between the spring rolls if possible. 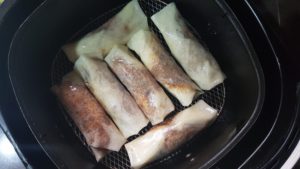 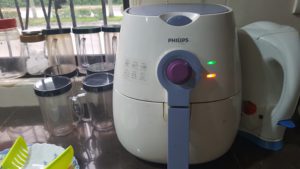 Drizzle with Nutella and serve warm. 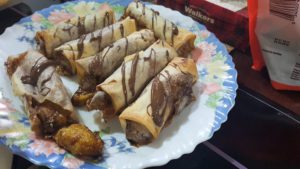